The theme of this Gonge Insights is static balance, and how River Stones can be used in training children who have difficulties with stability. There are three types of balance: Dynamic balance, proactive balance and static balance.

The theme of this Gonge Insights is static balance, and how River Stones can be used in training children who have difficulties with stability. There are three types of balance:

Dynamic balance: Dynamic balance is when we move and keep our balance at the same time. We balance on a supporting surface. The larger the supporting surface, the easier it is to keep our balance. Acceleration and speed of movement also help us to maintain our balance. We all recognise the situation in which, by accelerating just as we are about to fall, we avoid falling altogether. When we accelerate, our entire vestibular system helps us to maintain our balance. Just as we are about to lose our balance, we often react in order to avert a fall, for example, flailing our arms in a reflexive attempt to regain equilibrium. Cycling requires good dynamic balance. If you watch a child who is learning to ride a bicycle, you will note that the child’s balance is better when the bicycle is travelling at speed, whereas the whole process is more difficult and requires better balance when the child is cycling slowly.

Proactive balance: Proactive balance is the ability to predict what you need to do to maintain your balance a split second, before you do it, e.g. we know precisely how much tension and elasticity to apply in our legs, when we jump up from the floor and we know how much is required to gain equilibrium, if we land on a cushion or another wobbly and uneven surface. If we misjudge the movement, we land heavily or clumsily or lose our balance and slide off the cushion.

Static balance: Static balance is the ability to hold a position, i.e. when we stand on one leg while putting a sock on the other foot or when we hold our body in a certain position for a longer period of time, e.g. while working at a desk.

When all three systems are coordinated, we move elegantly and smoothly and our bodies work optimally and efficiently with no unnecessary tension. When playing and moving, all three types of balance are coordinated. In effect, each type of balance exerts strong influence on the other two.
Children may sometimes have problems with one or more types of balance. For training to be effective, it is important that the therapist analyses the weakness and exercises the type of balance the child finds difficult and, at the same time, exploits the child’s own resources. 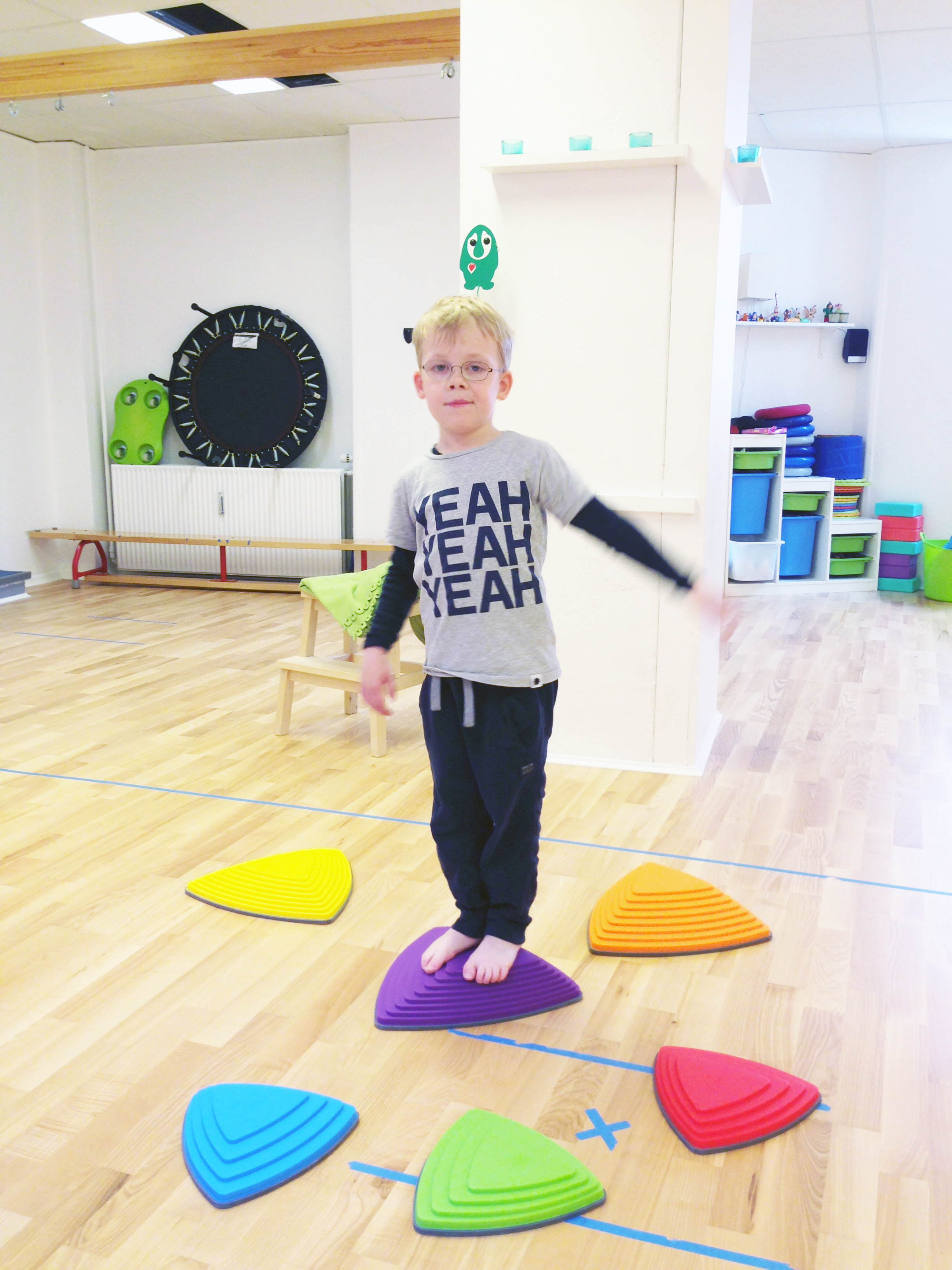 Michael is 12 years-old. He comes to see me, because he is upset that he has not yet learned to ride a bike. Michael has always had motor skills impairment. He is clumsy and finds it difficult to keep up with children of his own age.

His mother recalls that, when he was small, he always sat on the floor playing with cars. On the playground, he preferred to play in the sandbox. He is hesitant. He has never been able to walk in a straight line, climb trees or play football.Michael often fell and bumped into things, when he was little.

More recently, Michael has enjoyed swimming and running. He has also done weight training at a fitness centre. Although he loves sport and movement, his balance remains impaired. He lacks the courage to take part in cycle training. When testing Michael, I find that he has severe reactive balance problems. His arms flail wildly, when he is about to lose his balance.

Michael and I agree to three exercise sessions, in which he will practise using the underlying skills he needs to learn before he can learn to ride a bicycle. Between these sessions, Michael does a few daily exercises at home. Michael’s training sessions take place at 14-day intervals. After six weeks, we will begin to teach him to ride a bicycle.

We use hilltops in the training sessions and at home. Michael must practise walking as slowly as he can on a trail made of five hilltops of different heights. If he cannot keep his balance and if his foot touches the floor to prevent him from falling, he has walked too slowly. At every session, we write down how long it takes him to walk the trail with the five hilltops. To begin with, Michael can only keep his balance if he moves fast along the hilltops trail (7 seconds). Slowly but surely, he learns to move more slowly until finally he can take as long as 35 seconds.

Michael now feels he is ready to meet the challenge of learning to cycle. We have a chat to remind him that speed makes cycling easier – especially in the beginning. After three cycle training sessions, Michael is off on his own. He enjoys the sense of freedom. He also enjoys being able to transport himself to and from school and leisure activities as it saves time.